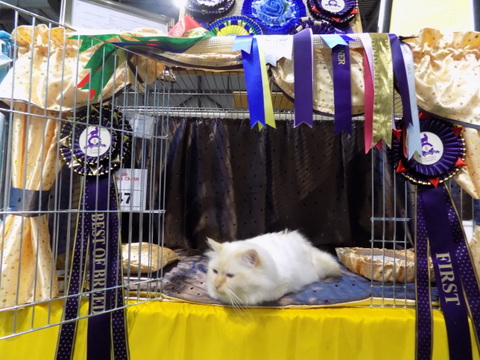 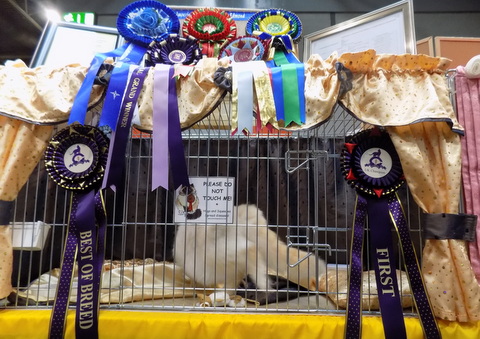 SAM IS NOW AN IMPERIAL GRAND CHAMPION (my first IGRCH).

A big thank you to all the Judges who thought so highly of him. 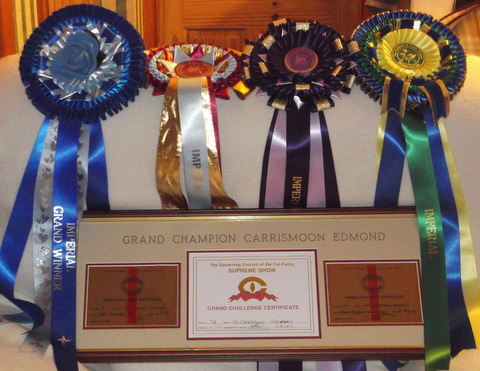 Thank you to Mrs. S. Moore for Sam's BOB.

Nose medium in length with a slight dip in profile coupled to his firm deep chin give his head the balance required especially for an entire male who will pass these qualities on, level bite and excellent plump cheeks from which sprout lovely long white whiskers. Gloves even and well matched good socks and long level gauntlets really clean and white. In full warm toned coat which has a soft glow to it which compliments his uniform red points, good tail length. A good temperament and easy to handle. 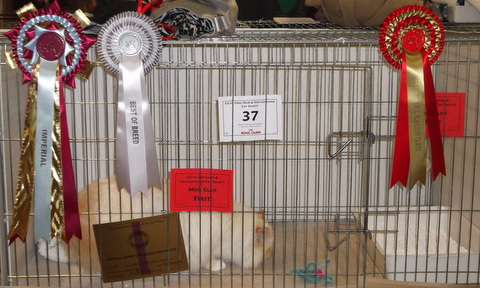 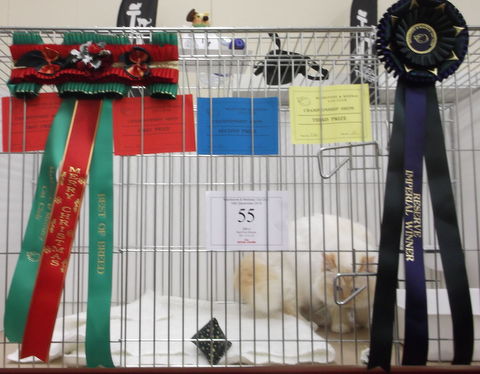 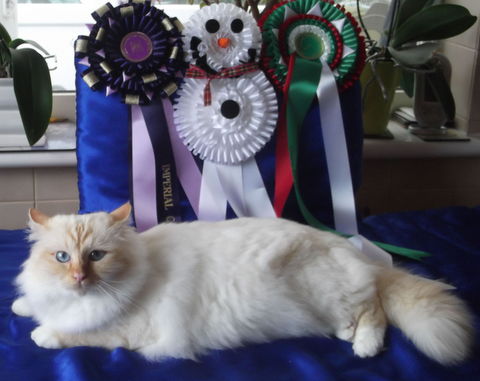 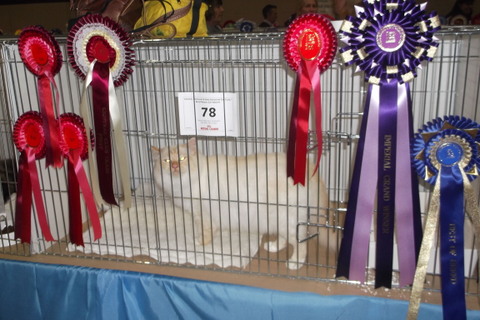 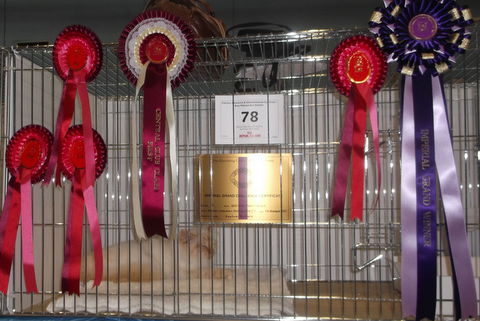 SAM IS NOW A GRAND CHAMPION!! 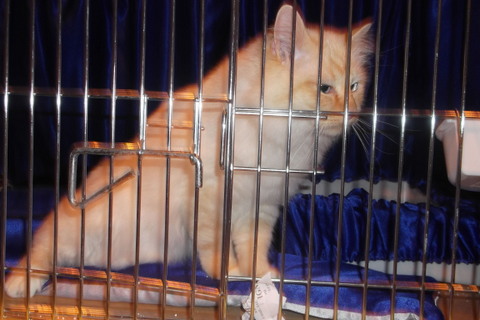 What a super placid laid back chap who was such a love to judge. A large red point boy who

needs to just mature on more. He has a round head with strong and rounded skull. Medium

size to his ears which were positioned well. Nose of medium length with slight dip when viewed

in profile. Almost round eyes of pleasing deep blue which were so gentle in their expression.

his bite was level. He has a large frame which he does need to fill out to come back into overall

balance carried on strong legs and rounded paws. Tail in balance to his body and well furnished.

his underside. Very nice red markings which were just slightly paler in tone on his legs. Pristine

white gloves which were very even as were his socks. His gauntlets tapered to below his hocks.

Shown in super condition and oh, so placid

A young male but with very promising bone, substance and muscle to him. The head had breadth with rounded contours. His medium sized ears were set well apart. He had large eyes that were almost round, an excellent blue and a lovely, gentle expression. The muzzle was well developed and he had a good chin. The body was long and muscular with strong legs and large paws. The tail was well in proportion and bushy. He had a lovely coat that was well presented. The points were a bright red and there was excellent contrast. The gloves were nicely shaped but the gauntlets slightly uneven. He was in excellent condition and coped well with his unhappy neighbour.

1.CC  & BOB DAVIES’S CARRISMOON EDMOND (SBI d) M. 27.04.2014 Just eleven months old and already a sizeable and weighty young man who possessed very good head type.  Broad rounded skull with medium sized ears with plenty of space between, beautiful deep sapphire blue eyes, almost round and gently expressive, nose of medium length with a slight dip and slightly rounded profile, he had width and fullness to his cheeks, tapering to a well-developed muzzle and a firm chin with a good bite.  Long body with excellent substance for his age and a full brush of balanced length.  Medium length thick set legs and large rounded paws, all feet well marked with matching gloves and socks and lengthy tapered gauntlets. Lovely coat for length and texture with a neat head framing ruff.  The body colour pale cream in tone complimenting his developing red points, his ears at present showing the deeper shade of red, his mask still to fully complete, the deeper colour spreading from the centre of his mask. His legs paler in tone, the greater depth of colour just above his feet, his tail deepening in colour to a darker shade of red. He was beautifully groomed and presented although he did have somewhat more curl to his underparts rather than a slight curl to the lower abdomen. Overall a very promising young man with a wonderful temperament. 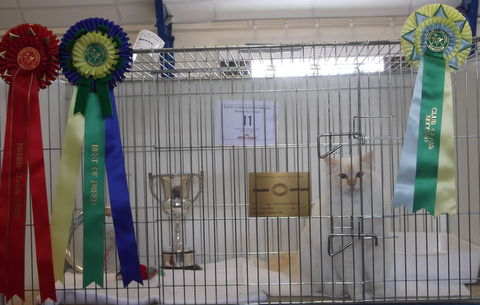 Red or Cream Point Adult Male
1 CC & BOB DAVIES CARRISMOON EDMOND (SBI d) 27/4/14. Red point male who was such a big softy. Lovely all round with excellent size and weight for his young age. Excellent type and eye colour, with small dip to profile and full cheeks with a firm chin. Beautifully prepared pale cream coat contrasting with rich red points colour. Feet markings very nice all round and sparkling white. I just loved him. 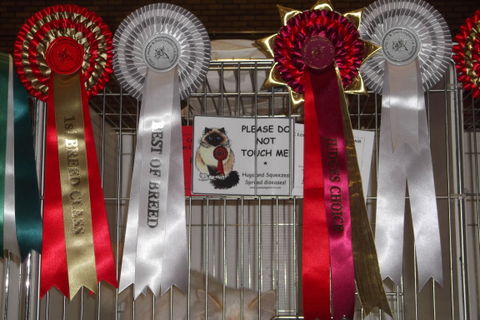 RED, CREAM or TORTIE POINT BIRMAN KITTEN
1 BOB DAVIES CARRISMOON EDMOND, SBI d, M 27.4.14. Super Red Point male kitten who at 6 months has used his time well. This is a handsome youngster with good overall size, balance & type. Head good shape, quite strong, broad & nicely rounded, ears are medium sitting well with head shape, medium length nose having slight dip in profile, just a hint of Roman shape. Cheeks quite full & rounding well, well developed chin tapering slightly with level bite. Eyes are almost round of good blue colour. Good length & weight to body for age, medium length thickset legs ending in short strong paws, bushy tail is medium length in good proportion to body. Excellent preparation to silky coat, ruff in place with slight curling on lower tummy. Orange red points, deeper to face & ears than legs & tail, mask not complete as expected for age. Body coat clear of very pale cream showing a slight golden hue. Front paws showing pure white symmetrical gloves ending in an even line across the paws, at the back not passing beyond angle formed by the paw & leg. Back paws have pure white socks that cover the entire paw & gauntlets then taper up the back of the leg ending just below the point of the hock. He is a super baby with a lovely temperament, do hope I get the opportunity to see him again. 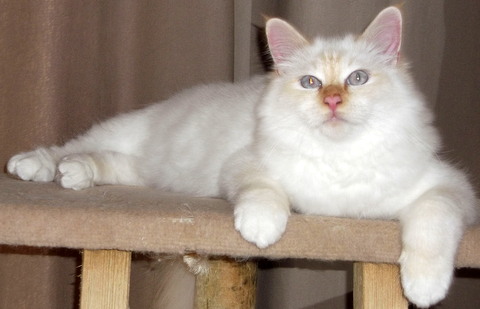 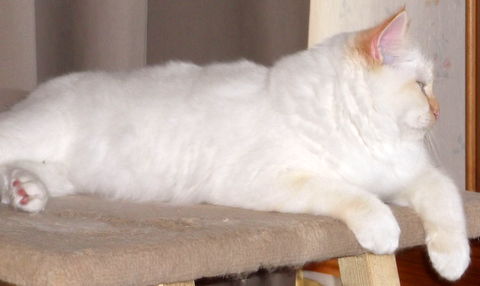 Our lovely new stud boy "Sam" (who just had to stay with us).